Roller derby slams in to Rotorua

Slam Rock, now in its fourth year, is a sporting event unlike any other in New Zealand. Along with mirror balls, spotlights, great music, fun and frivolity not to mention the annual Slam Rock Air Guitar Competition at half time, comes an action packed game of roller derby! 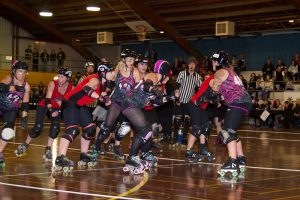 This year, Hamilton’s ‘Hellmilton Roller Ghouls’ are sending their travel team, ‘Raggedy Angst’ to take on Rotorua’s ‘Motley Crew’ in the hard-hitting, full contact game played on roller skates. It will be the third time the teams have played each other, and with one win each, Slam Rock will see Raggedy Angst and Motley Crew battle it out for the ‘best of three’.

“Motley Crew have taken the win at all three previous Slam Rock events, so you know the pressure is on as it always is on home ground!” Sulphur City Steam Rollers Chairperson, Layla Robinson (Primevil) admits. “But we go into all our games with a great attitude, and have often been told we’re one of the most fun teams in New Zealand to play, so I think we have a good balance of being competitive and being great sportspeople.” 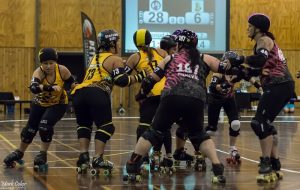 In the game of roller derby, which is full contact and has been likened to ‘rugby on skates’, players skate around an oval track in a pack made up of eight players, four from each team, who hold the position of blockers. Blockers must remain within a certain distance from each other at all times. Also on the track are jammers, one from each team who are the point scorers. It is the jammers’ role to attempt to ‘break’ through the pack and score points for each opposition player they pass.

Following an extensive rule set, modern roller derby also includes a large group of officials who keep the players in line and track game statistics. There are up to seven referees required during a game, each with individual responsibilities. Up to 14 Non-skating Officials are also required, and generally include newer skaters, or in Steam Roller terminology, Groupies.

The Steam Rollers welcome spectators to dress in their ‘rock star’ best for the event, with prizes being given to the Best Dressed Adult and Child. The teams also ask that their friends, family and fans bring a sign to show who they’re rooting for. The Best Supporter Sign will win a signed, framed copy of the event poster and Sulphur City merchandise. 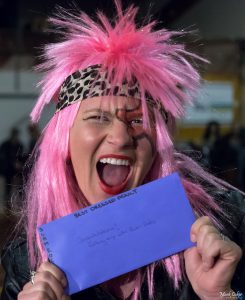 Half-time entertainment includes the annual Slam Rock Air Guitar Competition which invites adults and kids from the crowd to compete in an Air Guitar battle in the centre of the track.

“The Steam Rollers really pride ourselves on our Slam Rock event,” said Motley Crew Co-Captain, Nat Calder (Nat Demon). “It’s by far the biggest fundraising event we do each year and funds raised are put toward the cost of our travel games, uniforms and skate gear for our new recruits. With the help of Layla’s company, WildSide Promotions, a lot of effort goes into the event from concept to promotion to execution, our volunteer crew are well looked after and the feedback we get from those who have attended is always outstanding.”

Slam Rock has sold out in the past three years, so ensure you purchase your tickets when they go on sale to prevent disappointment! Door sales are not guaranteed.

Tickets for Slam Rock go on sale at 9am on June 1st from Ticketmaster at the Howard Morrison Performing Arts Centre or online at: http://www.ticketmaster.co.nz

Find out more about the Sulphur City Steam Rollers: https://www.facebook.com/sulphurcitysteamrollers or phone chairperson Layla Robinson on: 027 287 3837 or email sc.steamrollers@gmail.com