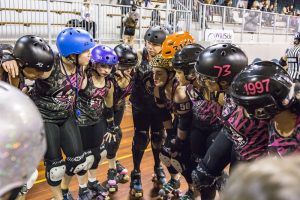 Rotorua’s roller derby league, the Sulphur City Steam Rollers have been forced to postpone their new recruit intake indefinitely due to venue issues. The intake was scheduled for Monday August 7th 2017.

The sports league hold two membership drives per year and were scheduled to hold an Open Skate Night on Monday, where members of the public could come and get skates on and find out what it takes to play, referee or officiate roller derby.

However, due to the lack of venue availability in Rotorua, the league have had to cancel the intake because they will have nowhere to train new members.

Existing Steam Roller members currently train two nights per week at Toi Ohomai Recreation Centre, where they have had regular bookings for many years. But to take new members, they would need a third training session of up to three hours. With Toi Ohomai’s full booking schedule, the league are unable to secure any extra trainings at their usual venue.

Members of the Steam Rollers’ committee have contacted all suitable venues in the Rotorua area and have been turned down either due to the venue being fully-booked by majority sports, or because of the misconception that skates ‘damage’ gym floors.

The Steam Rollers have offered references from reputable venues to state that their activities have not damaged the venues they’ve trained or played in but have still been denied. The league feel disheartened that they’re immediately discarded without a trial being offered.

With roller derby retaining its statistic as the ‘fastest growing women’s sport in the world’ and leagues continuing to be established in New Zealand and around the world, the Sulphur City Steam Rollers are now realising that they will fall behind if they are not able to grow their membership.

The league ask that any business or organisation with floor space of either a regulation basketball size, or 33m x 23m that is available for three-hours per week (potential for this to grow), consider hiring this space to them. The Steam Rollers are also looking into lease options.

While the Steam Rollers have postponed their Open Skate Night, they still invite those interested in roller derby to attend an open training on Monday 7th August from 6:30pm. Members of the public will be able to watch the local league prepare for their first game of the New Zealand Top 10 Derby Tournament being held on August 13th in Palmerston North.