Success comes to those who derby 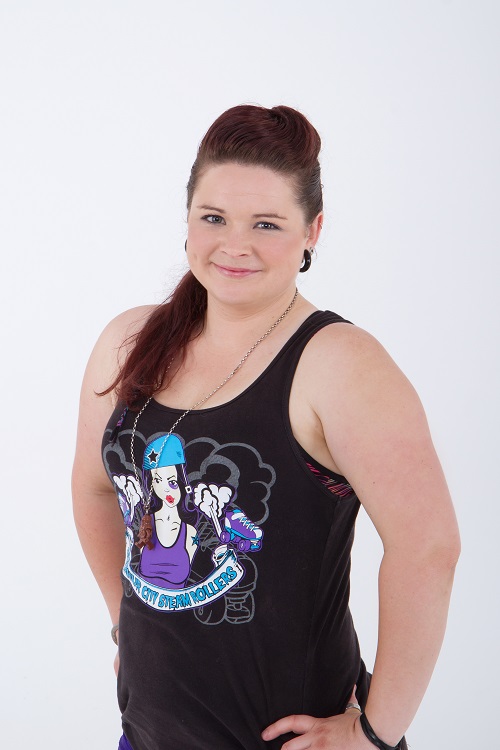 When Kerry Pearson took part in the Sulphur City Steam Rollers’ ‘Freshmeat’ Course for new roller derby recruits in 2012, she had no idea that one day she would have the opportunity to represent her country.

Kerry didn’t play team sports at school. Instead, she preferred to read, ride horses and watch marathon sessions of the Star Wars saga.

PCR are New Zealand’s original roller derby league and were established in 2006. Curious to find out more, Kerry went straight home and ‘stalked’ the PCR website, immediately falling in love with the sport and scene of these rolling misfits.

Unfortunately, due to issues only a full-time university student can understand, Kerry was unable to get involved in the sport at that time. It would be another four years before Kerry stumbled upon roller derby again. This time, it was 2012 and she was back in her home town of Rotorua where she discovered a local fledgling league.

The Sulphur City Steam Rollers (SCSR), Rotorua’s roller derby league, was founded by Primevil (Layla Robinson) and Raz (Kate Rasmussen) in 2011. Inspired by the movie Whip It, and sparked by the growth of roller derby in New Zealand, the two Rotorua women put the call out to friends on Facebook. After a successful ‘expression of interest’ meeting with over 25 people in attendance, Primevil and Raz formed a committee, became an Incorporated Society and started the training process. 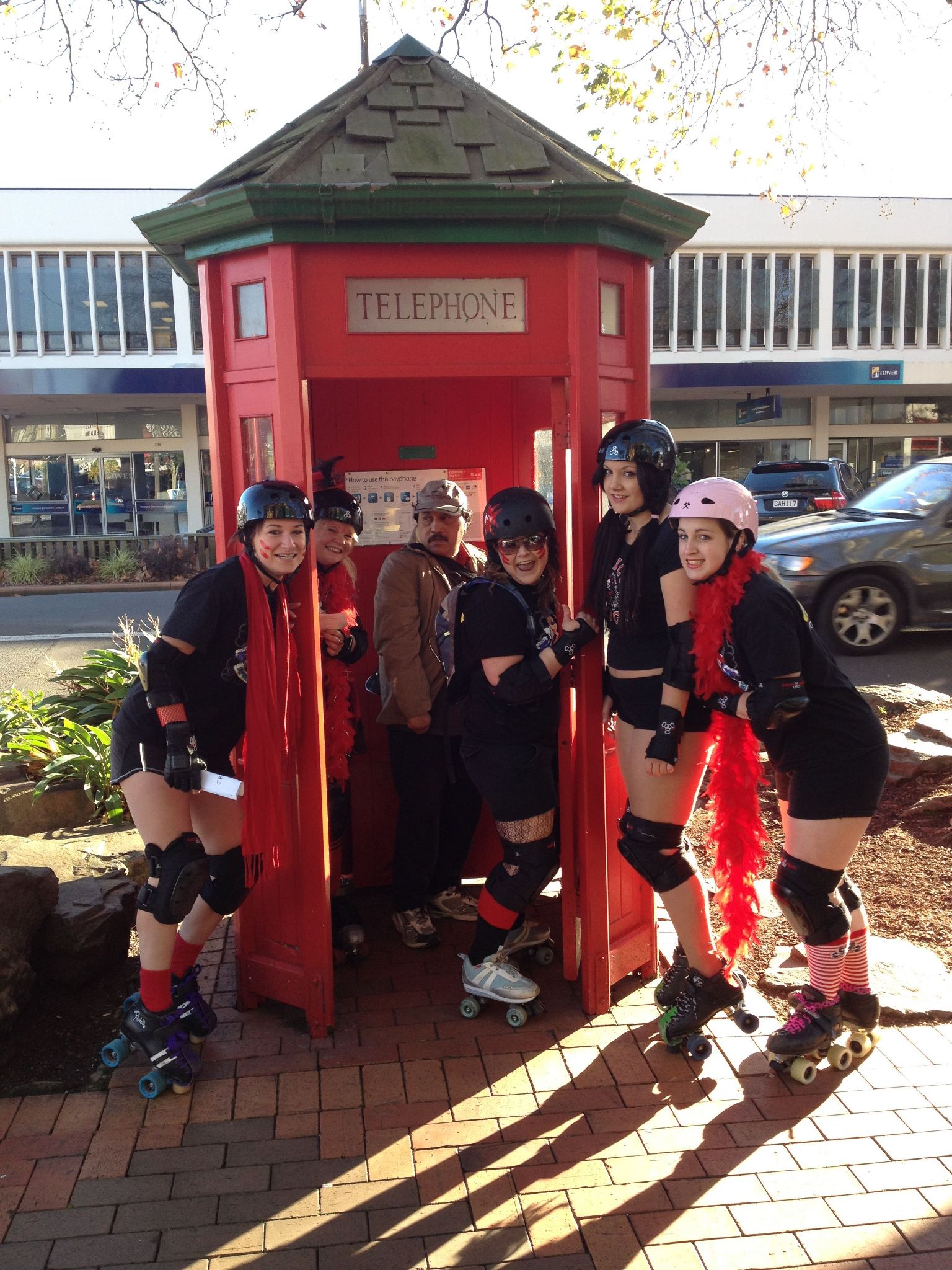 Initially, Primevil, Raz, Sadistic Doll (DeArna Branson, founding member) and a number of other SCSR members travelled 40 minutes each way to train with the Kawerau Derby Dolls. Kawerau’s coaches took them under their elbow pad adorned wings and put them through the Women’s Flat Track Derby Association’s ‘Basic Skills’ course.

Once the course was completed and the founding members of SCSR had passed their skills test, roller derby was finally brought to Rotorua.

When Kerry joined SCSR, she had good balance which made learning a lot easier. However, learning crossovers (propelling around corners) proved to be a challenge which affected her speed. At the time, new members were required to skate 25 laps in under five minutes (now 27), so the need for powerful strides on straight sections of the track, and equally powerful crossovers were imperative.

But Kerry faced this challenge head on and her perseverance paid off when she passed the Freshmeat course in October 2012. 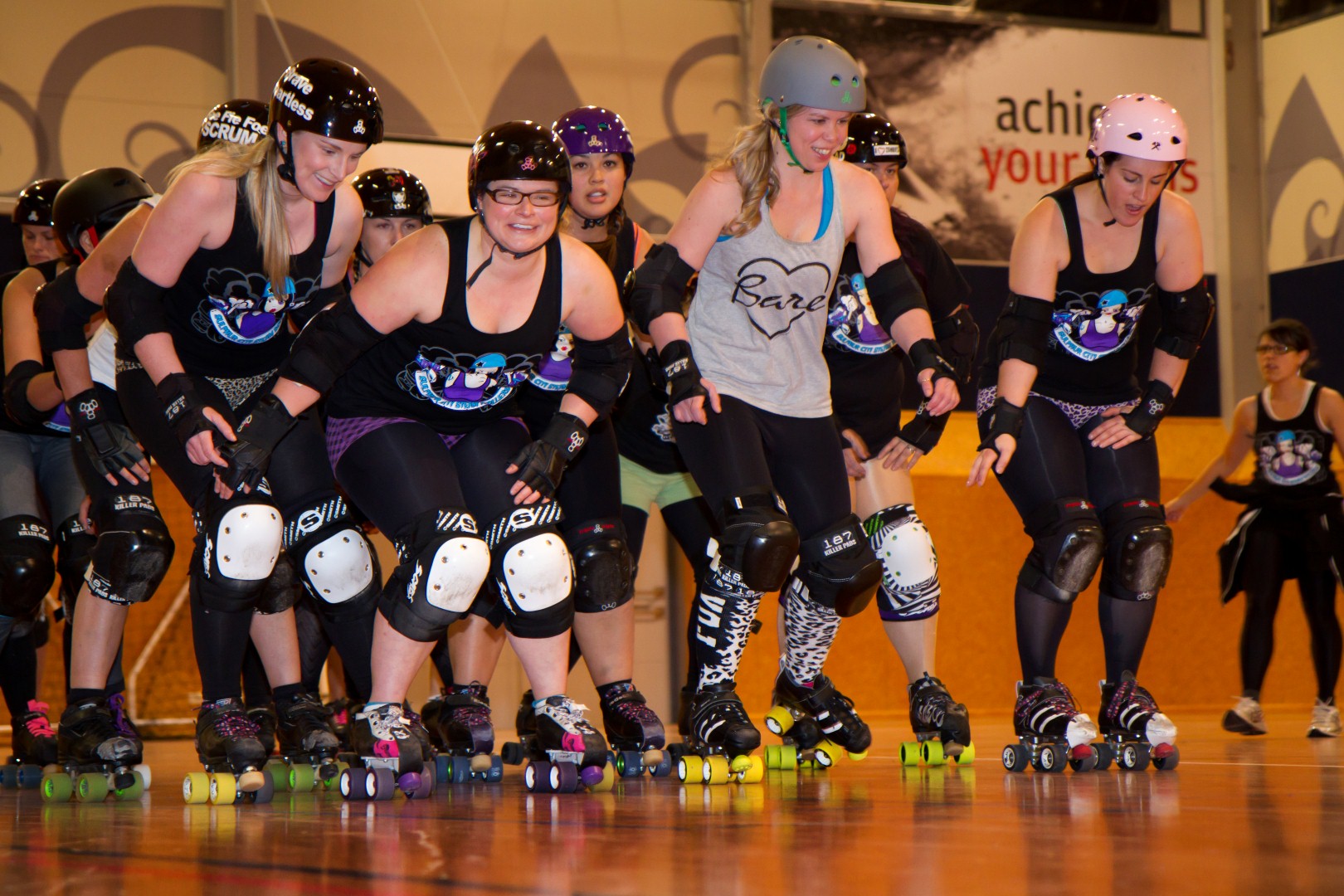 Primevil remembers Kerry as being one of the fastest learners she’d ever put through Freshmeat.

“Kerry was passionate and determined from the outset. One of the more difficult skills to learn for newcomers is to ‘transition’, which requires balance and stability to enable them to turn 180º and 360º. I recall Kerry doing one length of the gym to get her head around it, and then acing it on her next try.

“Although Kerry had very strong skills for a new-to-derby skater, I feel it was her commitment and positive attitude that made her fly through the skills test.” 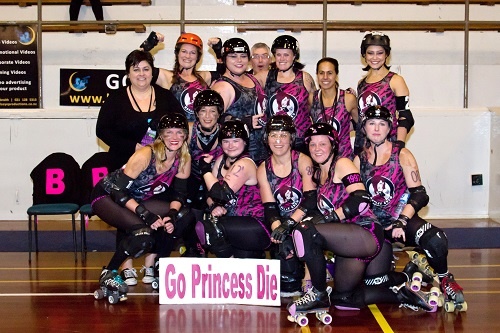 Like other roller derby leagues worldwide, SCSR’s Freshmeat course consists of 16+ weeks of planned coaching sessions where each week skaters are taught a new skill which is progressively built on. Kerry remembers a sense of accomplishment after every training.

“I would go home thinking, ‘well, I couldn’t do that two hours ago!”

Kerry also enjoyed the positive atmosphere of the course with a highlight being that if skaters didn’t ace the skill straight away, time would be spent looking at what they did right while also working on what they did wrong. This would enable them to work toward improvements the following week.

Along with a well structured course, Kerry also appreciated the welcoming atmosphere of roller derby, particularly the fact that it’s a sport that embraces any body type.

Once Kerry passed her Basic Skills Test, there was no stopping her. She went on to play for Whakatane Roller Derby League as a blocker while SCSR used the year to prepare newer skaters for the league’s first game. 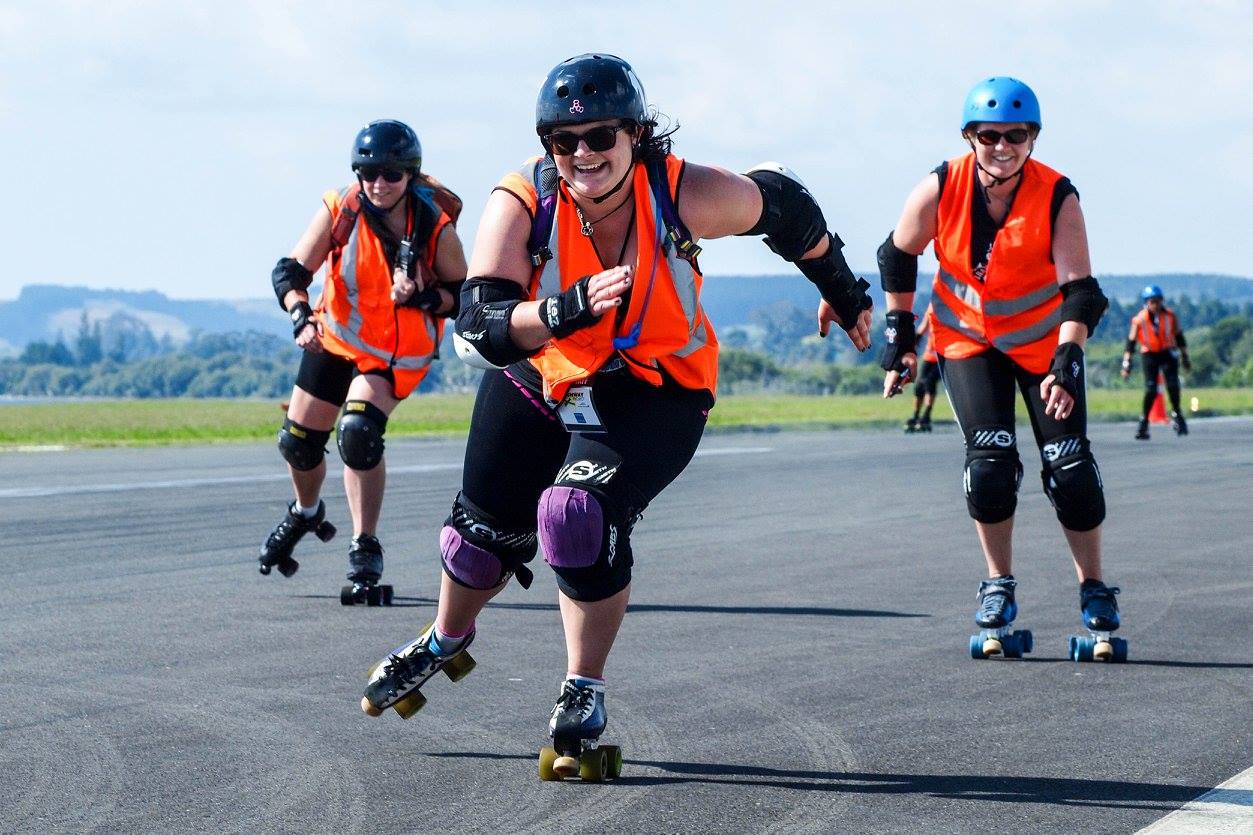 Kerry enjoys her role as a blocker due to the mental challenge of the game, knowing when to play offense or defence, and what she can do to support her teammates.

When Primevil and Raz took a break from coaching in 2013 to raise the next generation of roller derby fanatics, Kerry, now named Princess Die in the roller derby world, became a coach.

“Stepping up to coach SCSR was literally a life-changer for me and a huge turning point for my self-confidence. The support and encouragement I got from the league, enabled me to pluck up the courage to go back to University and get my Teaching Diploma in Secondary Science.

“While studying, I still managed my coaching duties and work which taught me a lot about how to manage my time so I could still do the things I love.” 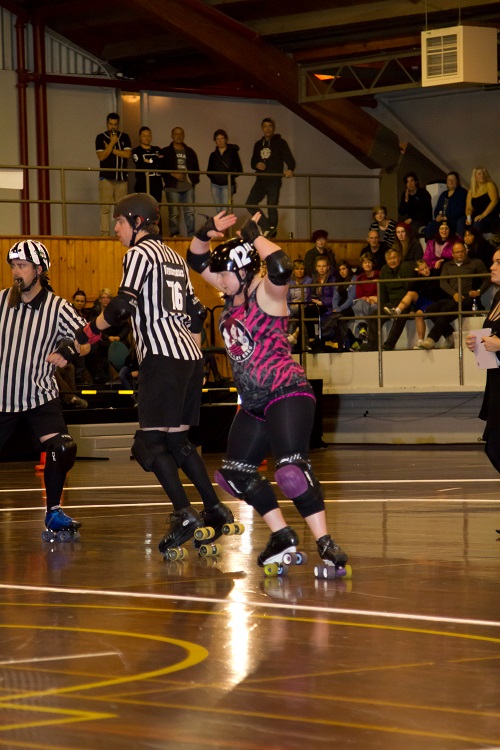 While to her team mates, Kerry handled this period of her life with ease, it was one of the toughest years she can recall. Not only a student, employee and coach, Kerry also has a long-term partner who she “tried not to neglect” during this time.

“The derby widow (partner of a roller derby skater) doesn’t think I’m as hilarious as I think I am when I’m with my derby family, but he is learning to live with Princess Die, the derby me.”

Princess Die has captained SCSR’s A-team Motley Crew to victory many times, but the highlight for her was actually a game that Motley Crew lost.

“The team spirit of Motley Crew in our 2015 game against Whakatane Roller Derby League was an emotional high for me. It was a mentally and physically demanding game and we ended up playing with only eight skaters! There was little to no break time but we held together and supported each other and kept the high fives alive.”

With the camaraderie of roller derby, close friendships often form. This was certainly the case for Princess Die who’s derby wife (closest friend and confidant in the team) Shan Grenade (Shannon Seymour), brought out the best in her.

Princess Die credits Shan Grenade with inspiring her to make a plan to achieve her goals and pushing harder to master a challenging skill.

“I look up to Shan Grenade who physically pushes herself as hard as she can at every training. It makes me feel like I need to try harder as well. It was because of Shan that I had the courage to try out for the Team New Zealand training squad. 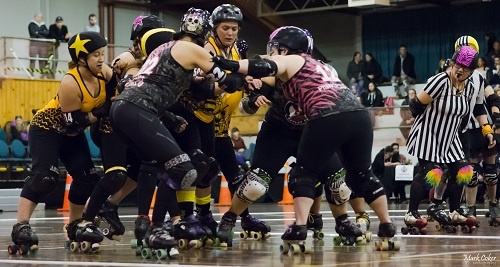 “My ultimate goal in derby is to take it as far as I possibly can. When I was accepted as part of the initial training squad for New Zealand, I was blown away. I never would have dreamed I would come anywhere this close to representing my country in anything!”

“If someone had told me five years ago I would be on a training squad for a NZ representative team I would have laughed at them.”

“Die is obsessed with derby, even more than me,” said Shan Grenade. “She listens to derby while cleaning the house, watches derby at every opportunity, travels to other leagues to coach and train with them and has rulebook knowledge second to none. I’m not surprised to see her in the training squad at all, and I hope to see her go further!” 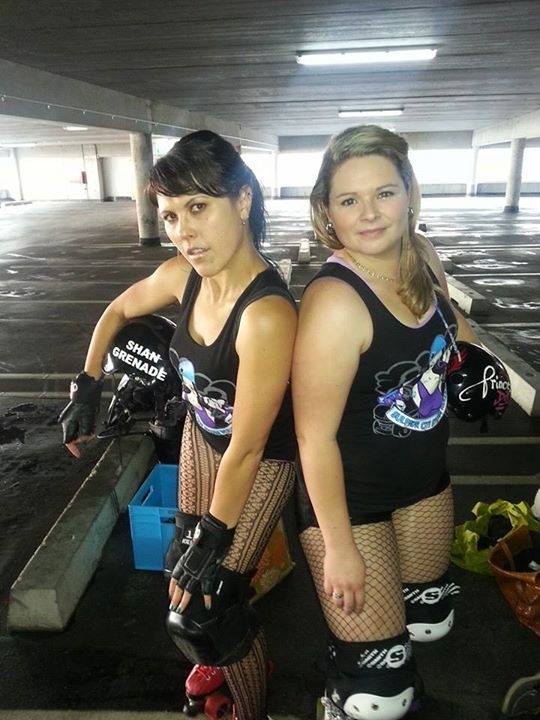 The next phase of Team New Zealand tryouts is in early February at New Zealand’s annual roller derby event, Full Contact in Auckland. To ensure she puts her best skate forward, Princess Die has started running to help with overall fitness and has also joined the Rotorua Group Challenge boot camp to help speed up recovery from the off-season.

Being accepted into the training squad isn’t the only big news Princess Die has had recently, with the Sulphur City Steam Rollers having been invited to play in the New Zealand Roller Derby Top 10 Championship. This will see the league in playoffs throughout the 2017 season, with a final tournament being held in November.

Princess Die is proud of her beloved sport and how appreciation and respect for roller derby has grown so well in recent years. But she’s particularly proud of her league who have held four successful large events in their hometown, and are instantly recognised out and about as the ‘derby girls of Rotorua’.

Her goal for SCSR would be to grow the league and share derby with more people. 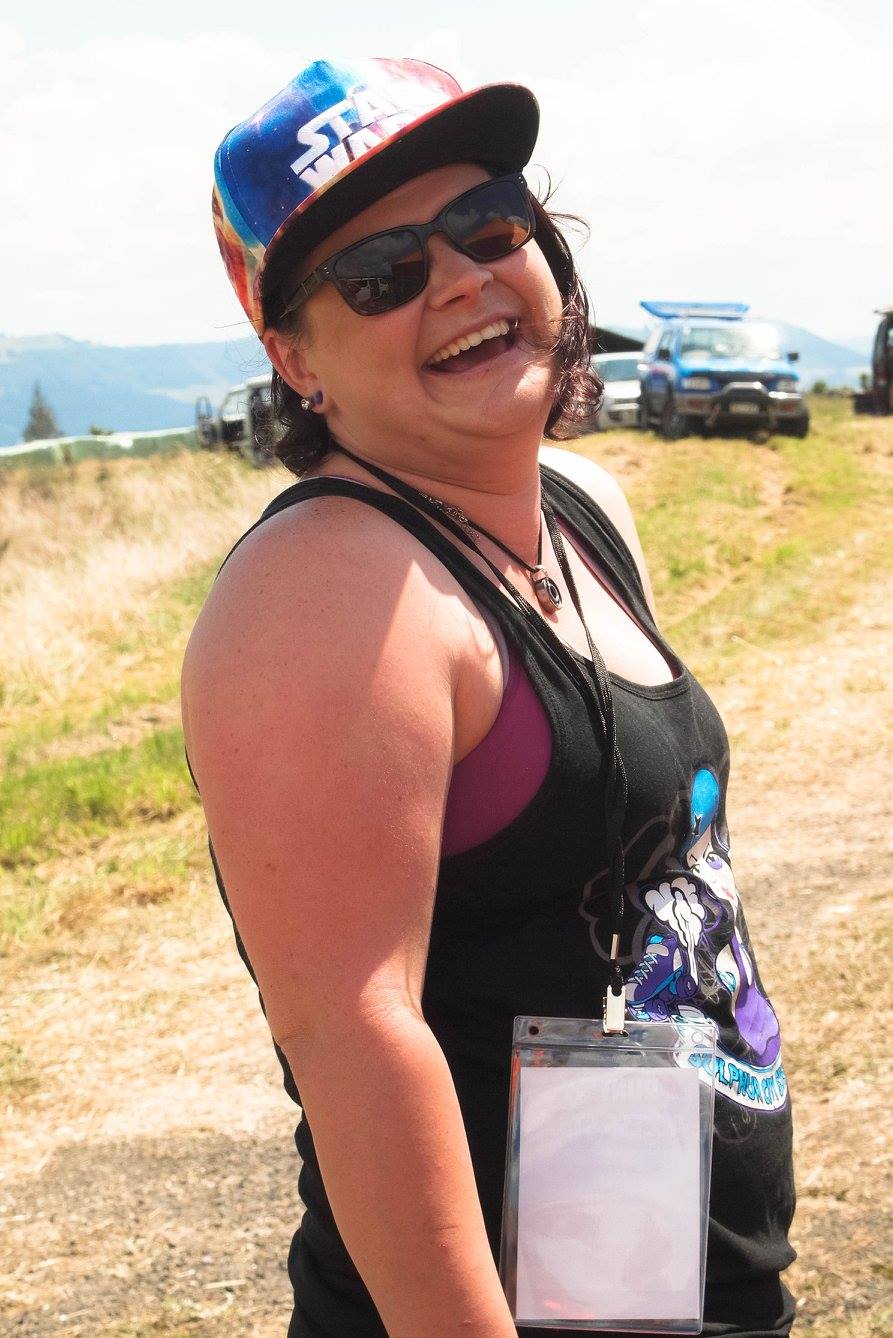 “With support from the public and their growing interest in our events and teams, we would like to bring roller derby to the wider Rotorua community. This is difficult, as we do not currently have a training venue that meets our specifications for training so it is hard to expand the size of the league by creating other factions such as Junior Roller Derby.”

The Sulphur City Steam Rollers are currently working on a proposal to present to the Rotorua Lakes Council in the hope to drum up support for a skate rink that they can call home. With a strong team culture and common goal, the league are ready to work hard to make the growth of SCSR happen.

Now with a permanent teaching position at a local high school, Princess Die hopes to share what derby has to offer to the younger generation. Particularly those (like her) who are not interested in mainstream sports.

SCSR welcomes those over the age of 17 to attend the first new recruit intake of 2017 in February, and Princess Die wants to challenge people considering joining, that it’s worth it.

“Push yourself to overcome the challenges because you will learn so much, not just about the game, but about yourself.” 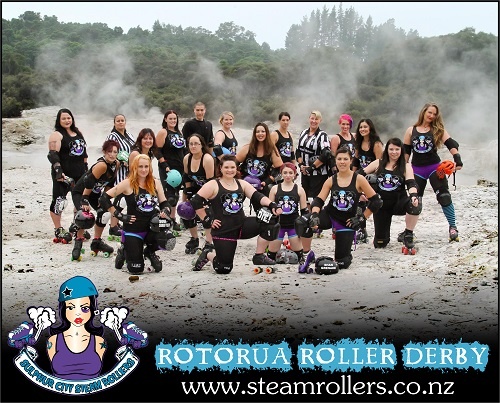 Princess Die’s Message to SCSR: “Thank you for everything you give to our league, all the blood (literally), sweat and tears. You guys are my heroes! I’ve watched many of you gain confidence in your skills and abilities on the track and you all make me very proud to be a Steam Roller!”

Captain’s Motto: “Keep the high five alive, and do some cool stuff!”

Recommended track skills: “Strong communication on the track is one of the most underestimated yet crucial skills a player has.”

Dream team to play for: “Rose City Rollers. Because if you could play as part of any team in the world, why not pick the best!”